Madeleine caught my eye in Issue Three of Simply Sewing magazine and it was love at first sight – a denim A-line pinafore with topstitching detail to die for. A second viewing in Mollie Makes Sewing and the gauntlet was cast.

The Moor Market’s very own material girl, furnished me with 2 metres plus of denim – a steal at £14. Next stop Sew-Rite for a notion or two and with denim topstitching thread and an enviable button stash already in my arsenal, I was fit for battle. The pattern and instructions are a dream to follow and perfectly pitched for the novice stitcher. However, the path towards victory was anything but smooth, testing the limits of my burgeoning relationship with the Jones.

Topstitching – it’s all about tension and unfortunately my machine has very little variance in this regard. However, I should have thoroughly taken it through it’s paces before marching in. But I was too eager to earn my stripes and boy were there casualties – jam city alert. The scars were only evident from within but worrying they would compromise the strength and usability of those glorious pockets, I unpicked section after section, followed by the tricky manoeuvre of matching up the topstitching between. Act in haste, repent at leisure indeed.

When it came to buttonholing I had to concede defeat. That recent moment of glory I had with the four-step button hole function was short-lived and it looks as though it’s died a death. Fortunately my mate Nik came to the rescue with his all singing, all dancing model – there’s pretty much nothing his machine can’t do short of making you breakfast. So, like a traitor, I abandoned antique charm for something that could deliver the goods.

My eagerness in clipping seams to remove bulk in the waistband, ended up adding bulk where the topstitching should have gone. After breaking a needle, this time I responded to the gutteral cries of a battle-weary soldier and bid a hasty retreat, leaving the waistband topstitch free. On the subject of bulk, I’d probably use a regular zip next time as the shiny, robust jeans zip I used, countered the effect of a hidden lap.

So many lessons learned but I emerged from the crusade triumphant. Pattern tweaks were minimal with the key measurement being at the waist. For my toile I cut on a 10, despite being closer to an 8, with my preference for a roomy fit. The only adjustment I made was to cut on a 8 at the sides, tapering up between an 8 and 10 at the waist. For the braces I used medium to large, positioning the buttonholes at the outside limits. It’s a skirt worthy of my beloved vintage steed and having just returned from a 250 mile pedal from London to Paris, I’m in victorious spirits. 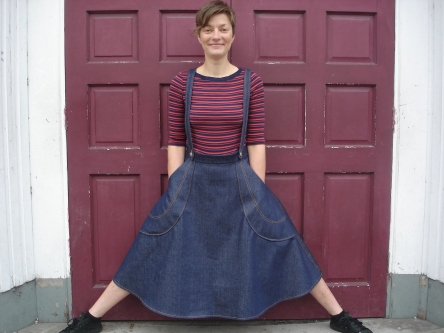 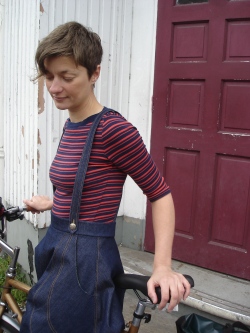 For my first attempt at this Victory pattern, I opted for the signature blue denim with gold topstitching and Madeleine wears it well. However, it’s begging for further interpretation and with so many options to play with, I’ll definitely be venturing once more unto the breach. I bid you adieu to embark on my next project with the burning question: